She was so extraordinarily beautiful that I couldn’t avert my gaze for many minutes. Her eyes met and held mine for that entire time. I knew then that in the years to come, she would have an effect on my life and work. The red hair, those amazing blue eyes, the perfect symmetry of her face, as though it had been manufactured with fine tools rather than being the random product of mere human genes. I never did find out her name, but decided to call her Siobhan, Irish being somewhat exotic in my family. I met her in Santa Cruz, where she worked as a wax mannequin in a store window. That was thirty years ago, and I remember it as though it had been yesterday. 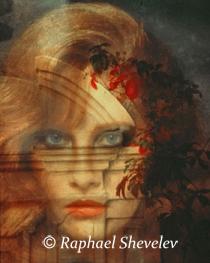 A few years later, once again heading south on one of many trips to Carmel-by-the-Sea, I spent time photographing at the Carmel Mission, particularly the south wall, where there was a lovely confluence of sculpture, foliage and weathered paint. It’s just the kind of place, I thought, that Siobhan would love, so I conspired to put them together. They’ve been together ever since, without a word of complaint. I’m sure she’s Catholic. 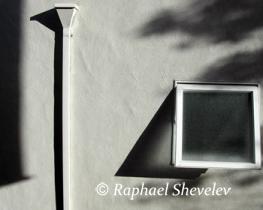 Several years went by and Karine and I purchased a home in the East Bay. Conveniently, the house next door was bought by a contractor and his family, and though Rob subsequently did very good work for us, he was also busy reconstructing his own home.

On his north wall, a levered bathroom window appeared, and day by day I watched as the light sketched new images through my dining room window.

By now it had reached my twenty-fifth anniversary with Siobhan, and the image of her and her Carmel Mission home continued to linger in my mind. The wall next door became more important to me during a period of illness, the difficulty relieved each time I concentrated my attention on making photographs. While Siobhan remained the exotic, the wall next door became my daily palette. 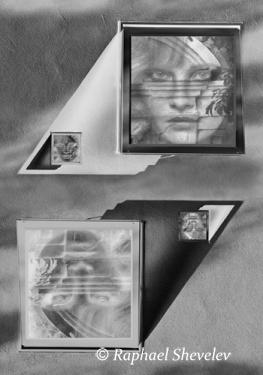 This week I worked on combining them, in what an art historian friend called “the perfect yin-yang of photography”: negative becoming positive and, upon rotation, positive becoming negative, fitted into the dual-sized negative and positive “frames” of the window next door.

This month Siobhan and I celebrate our thirtieth anniversary together. We are neighbors, now. She’s lost some pigment (as have I), but is still as beautiful as the day we met.

For decades I’ve claimed that pressing the shutter release button on a camera is an anti-climax, not a climax, or, at the very least, a premature climax. There’s so much more to be done.

Kodak invented the slogan “You press the button. We do the rest.” Really? Did Kodak invent the term “snapshot?” They may have been right. The last thirty years have gone by in a snap. Is there still a Kodak?

The "Irish" mannequin has a

The "Irish" mannequin has a haunting face. I can see why you were transfixed by her beauty and persona.

Her eyes are captivating. You

Her eyes are captivating. You did a beautiful job and I so enjoyed your story about her and what you did with her photo creatively. It looks like it could be the cover of a book.

I think this is the ultimate

I think this is the ultimate photographic yin and yang...but with angularites rather than spiralling curves! 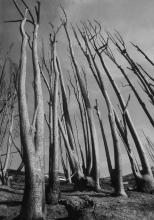 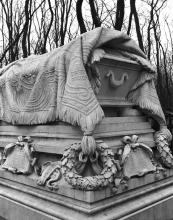 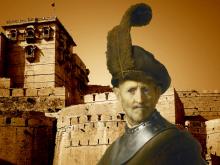