I am not now, nor ever have been, a threat to the reputation of Sir Edmund Hillary and Tenzing Norgay. I had climbed Table Mountain, then almost in my back yard, and the view of my birth city, Cape Town, and its harbor, from the elevation of 3,500 feet, was spectacular. That effort made few demands on me other than to remember a hat, a water bottle, and to wear stout walking shoes. Six years before Hillary and Tenzing had thrilled the world with their ascent of Everest in 1953, King George VI had visited Cape Town and, impeccably dressed in suit and tie, had walked up Table Mountain in the more relaxed company of his shirt-sleeved wartime friend, Field Marshall Jan Christiaan Smuts, then Prime Minister of South Africa. Memories are such an important part of inspiration.

More than sixty years later, climbing mountains is well beyond my physical capacity, but it still stirs my imagination, so I have to make mountains that I can climb in my fantasies.

As an artist, I have long since learned the lesson that to name objects is to dismiss them, to conceal and therefore steal their uses as design elements, as other than the uses which their creators had intended. A corkscrew can be, with a little thought, a remarkable sculpture, as can be so many of the things we take for granted at home or beyond. We have the choice of seeing them for what they prosaically are, or experiencing what they can be. We can read the labels, or we can drink the wine and discover truth.

Some years ago, my wife brought me a gift from the studio of my favorite ceramicist, the renowned Catharine Hiersoux, who is also a neighbor. I was captivated by the design. Catharine’s products are usually smoothly elegant and subtly glazed. I have several examples. This was not. It was rough, craggy, almost, do I dare say it, unfinished, and therefore, a stimulant to my imagination. It wasn’t just a vase, so it might be something else, many other things.

Each time I saw it, I remained puzzled by its draw on me. And then, having examined it from every angle, one morning I upended it, and found my mountain, Mt. Hiersoux. Over a period of weeks, I thought of how I could represent it in my studio. When I felt the desire for authentication of my effort, I sent an image to my friend Edwin Bernbaum, scholar, mountaineer, conservationist, identifying the peak as Mt. Arjun Niwas in the southern part of the Aravalli Range in western Rajasthan. He admitted an unfamiliarity, which I found most encouraging.

The next part of the process was finding an appropriate, dramatic sky background, rendered simple by the beautiful, color-saturated winter sunsets that illuminate the western windows of my home overlooking San Francisco Bay. Then came the need for a light snowfall on the upper reaches of Mt. Hiersoux. For that I’m grateful to the manufacturers of Gillette Foamy Shaving Cream (original flavor), which made unnecessary a trip to the Sierras in winter.

The last element was finding an appropriate human figure in the foreground. Among my friends is the prolific environmental author Kenneth Brower, son of the late David Brower, mountaineer, environmental advocate, former executive director of the Sierra Club, founder of Friends of the Earth. Ken also looked right: a handsome bearded gentleman, made even more right by wearing my favorite cold weather sweater, navy watch cap, and a pair of goggles borrowed from a neighbor. Ken’s face is never far from a warm smile, but I urged him to look fierce and determined, about to face his coming climbing ordeal.

A decade ago, after coronary bypass surgery, I contracted e.coli in the hospital and was confined at home for almost a year. To sustain me through that great difficulty, I photographed the most quotidian of objects in my home, watching the light move daily from one side of the house to the other, using photography to prevent despair. The book Light and Recovery: Vaulting the Walls (2011) was the result, and I got into the habit of an imagination that expanded as my freedom of movement contracted. I learned first-hand the dramatic notion of creative augmentation in the face of narrowing parameters. I believe they are essential partners. It’s called focus.

I titled the final image Scaling Mt. Hiersoux. A matter of scale, really.

THE GREAT INDOORS was originally published in Click the Shutter on Medium, where people are continuing the conversation by highlighting and responding to this story. 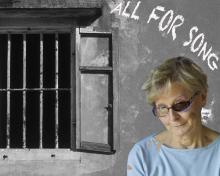 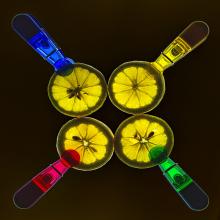